From GIS Lounge:
A Look at GIS Salaries

How much do those working in GIS make? In trying to figure out the financial landscape for the GIS industry, there are a few different sources available for determining what kind of salary you can expect to make as a GIS professional. The Bureau of Labor Statistics periodically updates its Occupational Outlook Handbook which contains a several sections covering geospatial professionals (more detail here).

Another way is through a salary survey. URISA puts out an extensive GIS salary survey roughly every three to four years. A smaller and more informal salary survey was conducted by GIS Lounge back in 2013.

If you are looking for more fine-grained and current GIS salary survey information, one method is via the job aggregation site, Indeed.com. The site offers a salary search tool that allows the user to enter in a job title and geographic location to see what the average salaries are for that position based on Indeed’s database of over 50 million jobs. When you search for a position, Indeed pulls listed salary information and presents an overall average salary amount as well as a graph showing how that salary information varies over the past four years.

Leaving the location box blank returns a national average for that position. You can also enter different titles to get a comparison of job positions. So how do the different GIS job titles stack up in terms of salaries?

I entered a range of common GIS job titles (e.g. intern, technician, specialist, analyst, and developer) and left the location box empty so I could see the national averages. Indeed assigns job types based not only on the job title but also pulls from the job descriptions. There is an option to restrict the calculations purely based on the job title by checking the box beneath the job search boxes.

Overall, the average salaries follows along the rough hierarchy one expects for GIS job titles. For example, that is GIS interns make the least amount of money, followed by GIS technicians. GIS Analysts average more than the GIS specialists and both GIS programmers and developers earn more than the Analysts. Among the management level positions, GIS coordinators make the least on average, followed by GIS Managers. Finally, GIOs make on average the highest salary among all the GIS positions I searched for.

Each of the GIS job titles is hyperlinked so the user can see a current list of job listings. If the salary information is listed, this information is posted along with the rest of the metadata for that job listing. 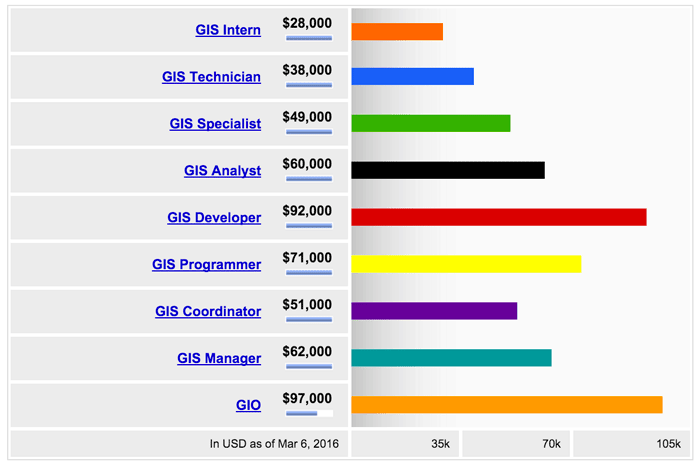 Indeed’s Salary Search tool is also great for understanding how geography affects GIS salaries. This can come in handy for decided where to focus a GIS job hunt if you’re looking to relocate. In this example, I entered a selection of cities to see how the average GIS Analyst salary varies geographically. 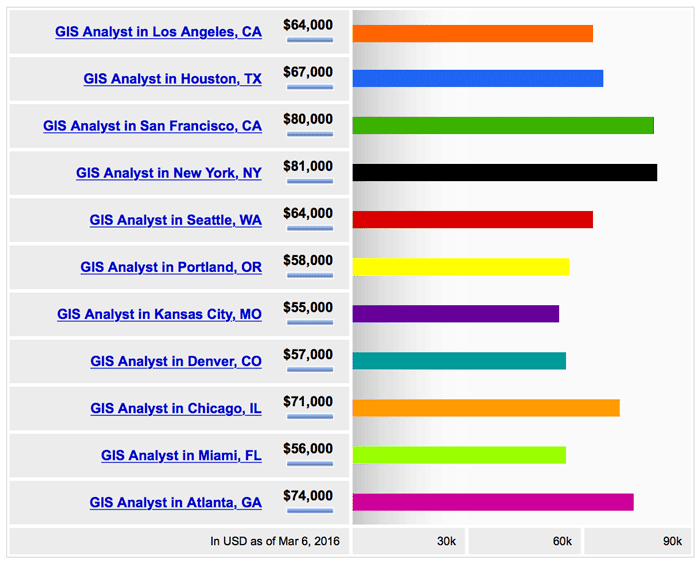 AVERAGE SALARIES FOR GIS ANALYST JOB POSITIONS FOR A VARIETY OF CITIES IN THE UNITED STATES. SOURCE: INDEED.COM, MARCH 2016

The cities I picked were selected for no particular reason other than they caught my eye while I scanned a map of the U.S.  In browsing the results, it’s no surprise that GIS Analyst salaries tend to be higher in major metropolitan areas, most likely to accommodate for a higher cost of living.  Two of the most expensive places to live, New York City and San Francisco have the highest average salaries, well above the national average for GIS Analyst positions.  What’s surprising within this short list of cities is that Los Angeles has a pretty low salary given how expensive it is to live there.