Within the fields of history and journalism, the use of GIS (Geographic Information Systems) has greatly changed the way we visualize, understand, and analyze racial bias within the United States and the globe. Maps have always been a way that we were able to conceptualize the topography of our universe, and now the use of GIS has given us more insight into the inequality embedded in our country than ever before. Below are just a few of the projects working to use spatial analysis in order to reveal the historical and current prejudices that people of color face every day.

In 2015, the New York Times profiled the Equal Justice Initiative’s (EJI) collection of data on historical lynchings from 1877 to 1950 within 12 Southern states. It visualized this data and presented a map of all the known cases. This demonstrated a high number of lynchings within Arkansas and Louisiana in particular, and gave a visual voice to a painful past. The EJI has now announced plans to build a museum and national lynching memorial in Montgomery, Alabama, which is near to a notorious slave-auctioning site. Both the maps of these terrible acts of violence and the ground upon which the museum will rest are a testament to the strong, difficult memories often tied to geography.

Beginning in 2014, non-white students outnumbered the number of white students within our nation’s public schools. The Urban Institute notes on its site that data collected by other organizations have revealed long-held historical biases: “The Civil Rights Project has shown that black students are just as segregated today as they were in the late 1960s, when serious enforcement of desegregation plans first began following the passage of the 1964 Civil Rights Act.” The mapping of the recent data on the racial composition in public schools has visualized the striking lack of contact even today between students of color and white students. 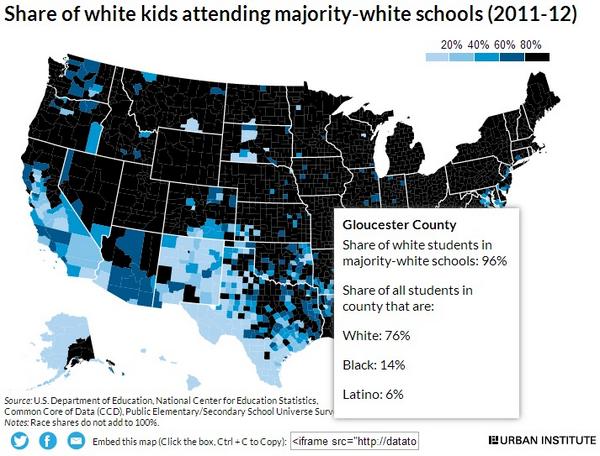 At my own institution, the University of Iowa, historian Colin Gordon and the team from the University of Iowa libraries has mapped a number of developments in the city of Saint Louis during the 20th century: the “White Flight,” “Race and Property,” “Municipal Zoning” and “Urban Renewal” maps are all interactive and quite revealing. The “Race and Property” map, for instance, has a 1916 layer that, among other developments, maps the city ordinance that designated the “Blocks in Which Negros May Take up Residence” [St. Louis Post Dispatch (2 March 1916) from the clippings collection of the St. Louis Public Library]. The site provides historical documents and context for the maps, and is just one way to understand the racial tensions felt within St. Louis even today.

A screenshot of the ‘Mapping Police Violence’ project as of October 25, 2016.

A fantastic new digital humanities project out of the University of Richmond is highlighting the practice of redlining (the denial of financial services) in America during the 1930s and 1940s. In the 1930s,  the New Deal’s Home Owners’ Loan Corporation (HOLC) created, as Bradford Hunt noted, ”color-coded maps of American cities that used racial criteria to categorize lending and insurance risks.” These maps have now been grafted as historical layers onto a base map of the U.S. and are fully searchable. As the site notes: “Visitors can browse over 150 interactive maps and roughly 5,000 individual area descriptions to get a view of Depression-era America as developers, realtors, tax assessors and surveyors saw it—a set of interlocking color-lines, racial groups and environmental risks.” Such spatial analysis allows us not only to see how racism is instituted, but also to see how historical decisions continue to have an impact on the U.S. today.

Screenshot of the Mapping Inequality project developed by the University of Richmond. Screenshot taken on October 25, 2016.

These are just a few of the projects using geo-data to visualize racism within the United States. When people ask me how digital technologies such as GIS have actually changed the ways in which we understand the historical record, all I have to do is point to one of these projects. As ever, maps give humanity a better understanding of our cosmos–even if it is an ugly landscape to behold.

Sarah E. Bond is an Assistant Professor of Classics at the University of Iowa. For more on ancient and medieval history, follow her @SarahEBond.