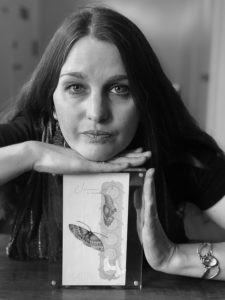 Alexandra N Sherman explores the landscape of the mind in her art through watercolor, installations, and collage. She seeks to give the viewer an intimate experience through small-scale, evocative watercolors and collages that explore the human existence, our sense of connection, and the responsibility we have to ourselves, others, and the environment.

Many experiences have led to Alexandra becoming the artist she is today. She spent a portion of her childhood living in London and traveling across Europe where the art and architecture to which she was exposed became the foundation for her art. As a result of her travels, she developed a fascination with illuminated manuscripts and 18th,19th, and early 20th century painting. She grew up in the antiques business and has been collecting art and antiques since she was a child. Growing up in the foothills of the Virginia Blue Ridge Mountains rooted her love of the natural world and the necessity to protect it.

She was the curator of the Dadian Gallery, assistant curator for Mobil Corps modern art collection, and has worked in several frame ateliers learning conservation framing techniques, and the French paper art of cartonnage. After earning her BA in Philosophy of Religion from Elon University, Alexandra continued her studies at the Corcoran College of Art. She received her MFA in drawing and painting from the University of Wisconsin, Madison, and has held artist residencies in Washington, DC and Buenos Aires, Argentina. She has taught experimental and experiential watercolor and collage classes in many different settings. Alexandra’s work has been exhibited in galleries and museums, and can be found in private collections and institutions.

Milagros in My Pocketbook is a reflection of our age of anxiety. The themes of communication, environmental and political uncertainty, inequality, and war are explored in 2 and 3D collages through the devices of absurdity, whimsy, and even gallows humor.

I have created multiple conversations between vastly different creatures, real and imaginary, to illustrate the need for communication and respectful discourse in our increasingly divisive society. Anxiety over climate change, extinction of species, religion, disintegration of the rule of law, threats of war, and our terrible powerless state of being (the human condition) are all expressed through the juxtaposition of humans, animals, and insects. The works address death, risky behaviors, weapons of mass destruction, and let us not forget the need for comfort animals and a good cosmic shrug.

As of late, it seems we need a miracle to fix what ails us politically and environmentally, hence the name, Milagros in My Pocketbook (Milagros is Spanish for ‘miracles’ and a reference to personal religious charms nailed to symbolic objects of prayer in the Mexican tradition). The piece from which the exhibition takes its name is part cynical and part heartfelt. I think things would be quite different if we carried our hearts in our pocketbooks. 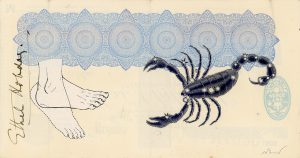 In my visual language, the heart represents not only love and life itself, but all that is vulnerable in our lives, leaving us open to great joy and suffering. As a person who has felt alienated by religion for much of my life, I have a complicated relationship to religious icons. I find them visually fascinating, and associate them with the history of western art, yet they hold a completely different set of meanings for me quite apart from their religious associations.

How the Collages came to be…

The collages in the Checks & Balances series began with a cache of 1930’s checks discovered in an English writing box. Wishing to harness the beauty of these objects from a bygone era, I felt compelled to transform them into art and began harvesting the ephemera I had started collecting as a child. The 3D collages are simply an extension of the work I began with the checks, and are also items culled from my personal collection. 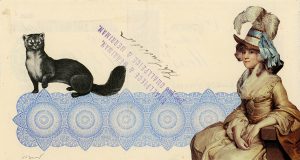 Many images in the collages come from vintage field guide books, other scientific illustrations, and portions of stamps.  Other images are excised from facsimiles of famous paintings and illuminated manuscripts. I have also incorporated images from vintage and antique holy cards into my work. They are often simultaneously over-the-top/ kitschy and beautiful. My interest in the contrasting elements of kitsch and beauty became heightened after living in Buenos Aires, as did my attention to the beauty of the Spanish language.

The title of the series, Checks & Balances, refers not only to the support upon which the collages are created, but also the checks and balances that our democratic society was built upon, which are now being put to the test. I find it interesting to consider the time period in which these checks were used because one could draw many parallels to the present. By the early 1930’s the stock market had crashed, creating ripples of economic hardship around the world. Fascism was on the rise, Hitler was soon to take power, World War II looming, and the United States  was failing to engage, claiming “America First!”