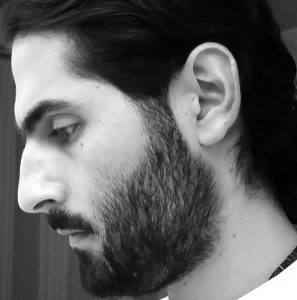 Steve Wanna is a multi-disciplinary sound and visual artist whose work includes music, sound design for dance collaborations, sculpture, installation, photography, and works for mixed media. Born and raised in Lebanon, he immigrated to the United States with his family as a teenager, eventually receiving a doctorate in Music Composition from the University of Maryland in 2004.

Wanna’s work is driven by his belief that under the right conditions, beauty can emerge without the need for direct intervention. He creates abstract, experimental fixed works and installations in a variety of mediums and formats that include sound, 2-D work, sculpture, video, and photography. His work is informed by the principle of emergence as defined in systems theory and Buddhism. His process often involves an element of controlled randomness, taking great care to prepare the initial conditions for a process whose final results are largely out of his control.

Some works highlight or capture the moment of their creation, a process frozen in time. These are usually mixed media works that draw on experimental techniques and use materials like paints, powders, and wax in atypical ways. Other works are in constant flux, perpetually in states of becoming rather than being. These employ various electronic components driven by software he designs to create controlled randomness, which imbues the works with a sense of autonomous life.

Wanna’s work has been presented at home and abroad. His most recent project was a solo show titled ‘Time Still Moving’ at the Angie Newman Johnson Gallery at Episcopal High School in Alexandria, Virginia. In addition to the month-long gallery exhibition, the artist also presented a video installation titled ‘Liminal Incarnations’ during a concert on campus by the National Symphony Orchestra Chamber Players that coincided with the exhibition’s opening reception. The installation transformed the concert hall using multiple layer of sheer fabric to create an ethereal, shifting space that complimented the music.

As a composer and sound artist by training, the perception of the passage of time is a strongly recurring theme in all my work, whether sonic or visual. I create fixed works and installations that deal with mainly three different manifestations of this concept: fixed works that represent or capture a single moment in time, fixed works that are the result of a long process, and works that are themselves processes in perpetual unfolding. The works in this exhibit come from two ongoing series that fit squarely in the first category. Through two distinct processes that involve elements of randomness, works in both series aim to capture and freeze a single event or action, not unlike a photograph might.

Myths of Creation is a series partly inspired by photographs from the Hubble Telescope showing events like exploding supernovae that occurred many millions of years ago. We seem to be seeing a highly energetic event that, despite having already occurred in a very distant past maintains an impactful sense of immediacy—the action of light traveling through the vastness of space becomes frozen, fixed in time by the action of our perception of it. Similarly, to see these artworks is to witness the very instance of their creation. Each piece in Myths of Creation captures and freezes a single action of tremendous energy. I create the works by combining liquid paints, powder pigments, and other aggregate materials into a small plaster shell and dropping it onto a prepared surface. The resulting explosion is then trapped, encased in a thick layer of clear casting resin. Like frozen moments in time, each piece captures the exact instant of impact of plaster shell and surface. Although I can, to a limited extent, shape aspects of the composition, the end result is ultimately out of my control. The process of removing myself from the creation of the work, too, is both exhilarating and humbling; each piece is an utter surprise, and the moment of impact is always terrifying and thrilling.

Works from the series “…she who makes the moon the moon” were partly—as the title indicates—inspired by Italo Calvino’s Cosmicomics. The way this postmodern author blends science and imagination has had a deep impact on my thought. The works in this series are a reflection on “The Distance of the Moon,” one of Calvino’s stories, which tells of lovers drifting apart as the moon recedes from the earth. The works are created from cast synthetic wax using a process that also has an element of unpredictability—the final result is revealed only after the work is completed. The final textures resemble cooled lava or the surface of some distant planet, especially when lit from the back.

In many ways the precursor of “…she who makes the moon the moon,” “come closer” is a sound and light sculpture the idea for which came from an encounter I once had while hiking. The sun was casting shadows through a yellow leaf that had fallen on the ground. I knelt down to take a photo and only managed to snap a couple before a passing cloud covered the sun, taking the shadows and yellow radiance of the leaf with it. I felt very lucky to catch that brief display. This piece consists of a set of four objects that can exist together or alone. Illuminated from within with LEDs, each is made of translucent porcelain that allows some light through. Each emits a single sound (a sine tone or pure tone) of a different frequency. The lights and sounds in each box are controlled by a dedicated microprocessor and software that gradually ramps up and down in a coordinated but random fashion, resulting in a hypnotic, constantly shifting experience.