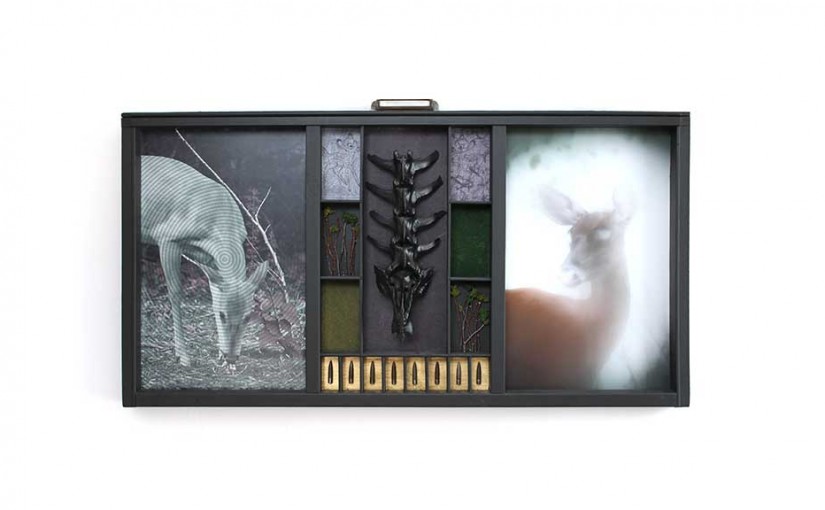 Certain narratives, such as those in fairy tales, have existed for millennia and maintain a grip on our collective imagination. They are refreshed and reiterated, showing up in popular culture in both familiar and novel ways; similar themes also emerge across cultures and generations. Using photography, digital photomontage, and found object assemblage, Zofie Lang’s work reconstructs these narratives visually by extracting their key elements. Zofie examines the underlying meaning of narratives, including the fairy tales she remembers her Polish grandmother telling her as a child and literature that has inspired her. Her assemblages creates new layers of meaning, consisting of a mix of nostalgia and contemplation of our present popular culture.

The original type cases in Zofie’s work reference literary works that were printed in the late 19th and early 20th century, while vintage dollhouse drawers are a nod to the tender age when impressions were first formed through stories.

“Drawers play a central role in my pieces, which harkens back to my ongoing curiosity about their contents, particularly when seeing them shut. While taking advantage of their compartmentalizing function, in my work I avoid using them to hide away by intentionally exposing their content to the viewer.”

“Compartmentalized” is Zofie’s first solo exhibit in the Washington DC Metro Area. She has shown extensively in various group shows in the DC Metro region including at the MFA Circle Gallery, Anacostia Art Center, Black Rock Center for the Arts, and various venues through the WPA.