Recording of the talk: Physics of Music

The Lyceum Committee welcomes Dr. Alex. Weiss to discuss “Physics of Music”.  This virtual event will be held on Thursday, April 28 at 1 p.m.(EST). Please register in advance here.

Music is the art of arranging sound in time that shows different characteristics. Dr. Weiss will discuss the similarities and differences between sound and music, properties of sound waves and standing waves in addition to science of musical instruments and psychoacoustics.

Dr. Alexander H. Weiss is currently a distinguished professor of physics and the chair of the physics department at the University of Texas at Arlington. He received his Ph.D. in physics from Brandeis University.  After receiving his Ph.D., Dr. Weiss was a post-doctoral researcher at Harvard University where he performed the first x-ray scattering measurements from liquid-gas interfaces.

For more information about this and other Lyceum events, please visit: https://blogs.nvcc.edu/lyceum/

The Lyceum Committee welcomes S. H. Fernando to discuss “Clan In The Front: How Wu-Tang Transcended the Rap Game to Become Cultural Icons”

S. H. Fernando is a man of many titles and much distinction. Music Journalist, Club and Radio Deejay, Music Producer, Film Director, Hip Hop Contributor and Aficionado. A graduate of Harvard University and the Columbia School of Journalism, Skiz Fernando began his career as a journalist on Hip Hop music and culture for The Source magazine.  In addition to writing for The Source, Fernando has written for the New York Times, Rolling Stone, and Vibe.  His in-depth research on Hip Hop led him to write and publish the groundbreaking and highly acclaimed book The New Beats: Exploring the Music, Culture and Attitudes of Hip-Hop (1994), which chronicled and preserved Hip Hop culture in an innovative way for readers.

Using his research generated from this book, Fernando started his own music label WordSound recordings in that same year.  In the last 20 years, WordSound released 65 full-length albums and numerous EPs, singles, and remixes, from experimental dub and hip-hop to electronic and Middle Eastern music.  Fernando, as a producer, has created 10 albums under his alter-ego, Spectre.

Fernando has also written, produced, and directed a narrative feature film Crooked (2001).  Two additional feature films he directed include The Greatest Thing You Never Heard (2003), a dubumentary about the WordSound label and Industria Brasileira (Made In Brasil) (2010), a documentary about the new music scene in Rio de Janeiro, Brasil.

In 2007, Fernando wrote a cookbook about the local cuisine of his homeland Sri Lanka titled Rice & Curry: Sri Lankan Home Cooking (Hippocrene Books, 2011).  This was a New York Times notable cookbook and got Fernando a spot on the popular Travel Channel show, No Reservations with Anthony Bourdain, where Fernando was the host’s on camera guide in Sri Lanka.  Fernando further writes a blog called “Rice & Curry,” devoted to Sri Lankan food.  He produces and hosts his own cooking show on YouTube called Pan Asian, as well as another food/travel show called Off The Eaten Path.

Recently in 2021, Fernando wrote and published From The Streets of Shaolin: The Wu-Tang Saga (Hachette Books), the definitive biography of legendary hip-hop group, Wu-Tang Clan.  This amazing work features “decades of unpublished interviews and unparalleled access to members of the group and their associates” (from book jacket).  His engaging talk will chronicle his research and writing of this groundbreaking text, and his interactions with the Wu members.  Hope to see you there!

This event is on Zoom, register in advance for this meeting:

Assal Habibi is an Associate Research Professor of Psychology at the Brain and Creativity Institute at University of Southern California. Her research takes a broad perspective on understanding music’s influence on health and development, focusing on how biological dispositions and music learning experiences shape the brain and development of cognitive, emotional, and social abilities across the lifespan.

She is an expert on the use of electrophysiologic and neuroimaging methods to investigate human brain function and has used longitudinal and cross-sectional designs to investigate how music training impacts the development of children from under-resourced communities, and how music generally is processed by the body and the brain.

Her research program has been supported by federal agencies and private foundations including the NIH, NEA and the GRoW @ Annenberg Foundation and her findings have been published in peer reviewed journals including Cerebral Cortex, Music Perception, Neuroimage and PLoS ONE. Currently, she is the lead investigator of a multi-year study, in collaboration with the Los Angeles Philharmonic and their Youth Orchestra program (YOLA), investigating the effects of early childhood music training on the development of brain function and structure as well as language skills, cognitive, emotional, and social abilities. Dr. Habibi is a classically trained pianist and has many years of musical teaching experience with children, a longstanding personal passion.

We are so excited that the NOVA TV/Video Services team was able to record our second event this semester! (If you missed our first talk, see our earlier post!)

Please enjoy this talk, with our speakers Jo Matyas and Craig Jones, “In search of the blues: Three chords and the truth.”

We are getting excited about hosting our next speakers, Josephine Matyas and Craig Jones on Tuesday, February 22, at 2 p.m. as they present their talk, “In search of the blues: Three chords & the truth.”

Please join us in the CE Forum for food, refreshments, and music! (Free parking in lot B13)

This event is open to the public and no RSVP is required!

Learn more about their work here:

This event is open to the public. Masks are required in all NOVA buildings.

*Free parking available for attendees in lot B13*

In this presentation, co-authors Josephine Matyas and Craig Jones will talk about how the music of the Mississippi Delta emerged from the conjuncture of politics, culture/ideology, geography (land/water), and the lived experience of humans under conditions of brutal oppression and inter-generational trauma. These forces converged to produce a form of therapeutic release – music, chants, field hollers – that served a collection of spiritual, psychological, ceremonial, and oppositional needs among enslaved persons. Craig and Jo will talk about the nature of life under slavery and how the reproduction of everyday life produced what became the blues. They will also show how the blues was revitalized in the United Kingdom, and eventually became foundational to North American popular music, informing music genres like Motown, R&B, soul, rock and roll.

The presentation will include a slideshow of the “sacred sites” of the Mississippi blues, which they visited as part of the research for their book, Chasing the Blues: A Traveler’s Guide to America’s Music.  Jo Matyas is a long-time travel writer who has explored the globe and has a special interest in the history and culture of a destination. Craig Jones has a PhD in International Political Economy and has worked as a professional musician for 40 years.

Please join us! Tuesday, February 22 @ 2-3 p.m. in the CE Forum in the Ernst Cultural Center – Refreshments will be served.

Watch the recording of “The multicultural roots of American music”

Review the slides from the presentation here. 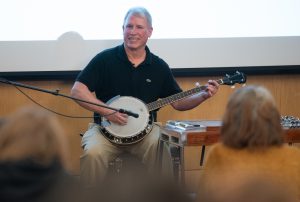 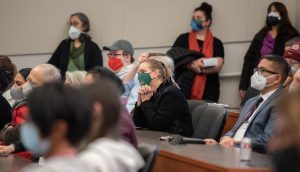 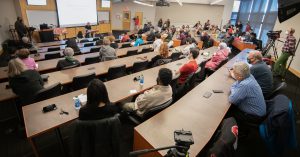 In this talk, Dr. Kevin Wright will discuss the multicultural roots of American music with a particular focus on three musical instruments (the banjo, guitar, and steel guitar) that had large impact on many genres of American music, including blues, country, bluegrass, jazz, gospel, and rock music. Dr. Wright will discuss the multicultural origins and history of these instruments and the impact they have made on shaping American music as well as demonstrate each instrument. This will include a discussion of multicultural influences (e.g., African, Hawaiian, European) on innovations and features of the modern banjo, guitar, and steel guitar as well as well as how these instruments shaped multiple American musical genres. Dr. Wright brings both an academic perspective on these topics as well as his experience as a professional musician for over 30 years.

Dr. Wright will bring the pedal steel guitar, the banjo, and a guitar for demonstration purposes.

This spring, the Lyceum Committee is excited to present an inter-disciplinary series of talks surrounding the power of music. From history, to science, to genres and more, we hope that you gain even more appreciation for the impact of music in our lives. 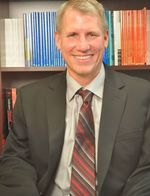 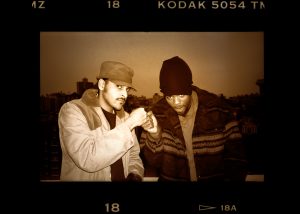 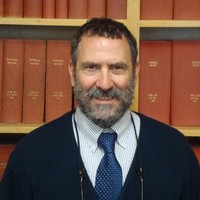 *Check back soon to (1) register for Zoom sessions and (2) Get room information for in-person talks.*

**If you’re a professor bringing a class to an event, please email me mchabot@nvcc.edu to let me know to expect your students, and (2) attendance lists are provided on request**

***We strive to make every event fully accessible with interpreters; if other accommodations are needed, please contact mchabot@nvcc.edu*** 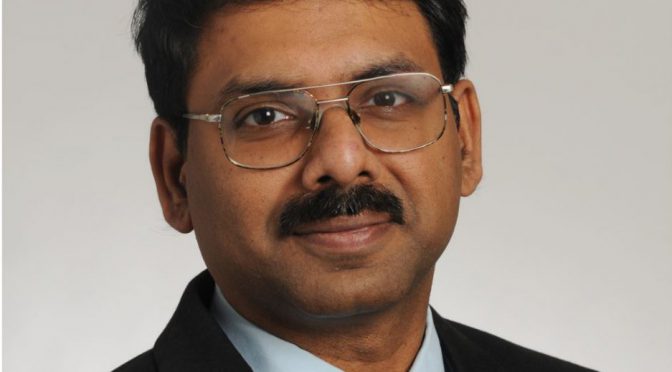 Register in advance for this meeting:

Title of the Talk:

In this talk, we will learn how to employ a human-centered approach to solving real-world challenges in the community using a design thinking framework. It will introduce lifelong competencies, practices and concepts needed to collaborate in an interdisciplinary way to solve important challenges such as those posed by the UN Sustainable Development Goals. The talk will be accessible to all disciplines and majors.

Dr. Padhu Seshaiyer is a tenured full Professor at George Mason University, Virginia, USA and he serves as the Director of the STEM Accelerator Program as well as the Director of the Center for Outreach in Mathematics Professional Learning and Educational Technology (COMPLETe). His research interests are in the broad areas of Computational Mathematics, Biomechanics, Data Science, Computational Thinking, STEM Education, Design and Systems Thinking, Innovation and Entrepreneurship. During the last decade, he initiated and directed a variety of educational programs including faculty development, post-graduate, graduate and undergraduate research, teacher professional development, outreach and enrichment programs to foster the interest of students and teachers in STEM at all levels.

Dr. Seshaiyer is also actively involved in multiple global collaborative projects and training programs that engage students, teachers and faculty from over 25 countries. He has published over 130 peer-reviewed journal articles, presented over 300 invited/plenary/keynote talks and serves on several advisory boards including his recent appointment to the VA STEM Advisory Board by the Governor of Virginia. In addition to his research accomplishments, he has contributed extensively to teaching and won several prestigious awards. In 2021, he received the Earle C. Williams Presidential Medal for Faculty Excellence in Social Impact which is the highest honors at George Mason University as well as the top educator award from the State of Virginia for his efforts to promote gender equity in computing. In 2019, he was selected as Figures that Matter and was awarded a honorary doctorate from Vrije Universiteit Brussels, Belgium for being a committed scientist who transcends the boundaries of their own disciplines and to personalities that have been at the frontiers of societal change.

Please join the Annandale Lyceum Committee in welcoming Dr. John Schmitz, NOVA Professor of History, as he delivers a Constitution Day talk based on his latest book, “Enemies among Us: The Relocation, Internment, and Repatriation of German, Italian, and Japanese Americans during the Second World War”

In “Enemies Among Us,” Professor Schmitz examines the causes, conditions, and consequences of America’s selective relocation and internment of its own citizens and enemy aliens, as well as the effects of internment on those who experienced it.

Link to registration to receive the zoom link : Register NOW!