Born after 1996, our newest generation is on the workforce horizon:  Generation Z.  Also called GenZ, iGen, and the Cloud Generation, these post-millennials were the first to conduct childhood friendships on portable devices, a skill that has come in handy during COVID-19.  They’ve mastered the art of achieving an entire conversation with images (emojis).  Independent, pragmatic, stubborn, and always in a rush, Generation Z will bring a new challenge to corporations.   That’s if they arrive as workers on the corporate scene at all.  Most reports say over 75 percent of GenZ-ers want to start their own company and not work for others.  If they do arrive on the corporate scene, how will they want to be trained and supported at work? END_OF_DOCUMENT_TOKEN_TO_BE_REPLACED Some days it is easy to be a leader; it’s a pleasure.  The organization is humming along, results are happening, employee morale is high, and life is good.  But leadership has a tough side too.  It is a cycle and there are definitely challenges.  How can we stretch our leadership skills to be a strong leader ready for anything?  This month we’ll take a look at some of the tougher sides of leadership and what to do now to embrace practices that will make us better leaders. END_OF_DOCUMENT_TOKEN_TO_BE_REPLACED

America’s hardest-working frog has a few things to say about good management practices. From emotional intelligence to team building, project management, contract management, and risk and change management, Kermit has a lot of experience in managing a diverse team.

Kermit has always been the leader of The Muppets. He’s a brave risk-taker who inspires the people around him to do their best… Seriously – what business wouldn’t want a level-headed frog like Kermit running the show? (SimplyHired, June 2015) Are you a new manager? A little green on leadership skills? (sorry – we couldn’t resist the pun!) Check out our Management Practices Certificate program, with 9 courses that will teach you the essential skills of being a manager.

An overlooked skill, Emotional Intelligence, is essential to anyone in a leadership role.

“Always stay calm. Never let your team see you get red in the face. —Of course, that’s much easier when you happen to be green.” (Kermit the Frog)

Of course, management skills can be put to good use even if you are not managing a team, a project, or a hilarious troupe of Muppets. We all have natural leadership skills, and NOVA Workforce Development is offering a new class this fall, called Leading Where You Are (Manassas Innovation Park, November 7, 2015).

Wondering how some leaders are able to inspire employees to go the extra mile? If you have a staff that is diverse and multi-talented, you need to understand social intelligence and how it affects interactions with co-workers, customers, and business associates. Leadership Using the Social Intelligence Model will be held on November 14 in Woodbridge.

Of course, we have many courses that will help you strengthen your management skills. Check out our new MyWorkforce online course listing and registration portal for a listing of Leadership and Management courses being offered at our NOVA campus locations this Fall!

If the video below fails to load, watch Kermit’s “Top 5 Management Tips” video online at ABC.com or on YouTube.

The Muppets Studio, LLC, formerly The Muppets Holding Company, LLC, is a wholly owned entertainment subsidiary of Disney Consumer Products and Interactive Media Labs, formed in 2004 through The Walt Disney Company‘s acquisition of The Muppets and Bear in the Big Blue House assets from The Jim Henson Company.

Leaders can be iconic, causing a shift in how people approach leadership.  Unfortunately, a leader who really changes things—a company, a product, or an industry—often causes a “guaranteed success!” rallying cry that is doomed to fail for many. After all, leadership, at its very core, is unique to each company and each individual. Some people can respond to a leader who is authoritative and dynamic; others may perform better under a leader who acts as a mentor to the team. There is no one-size-fits-all approach to leadership; leaders must think beyond themselves, and develop their skills at every level.

“A leader is best when people barely know he exists, when his work is done, his aim fulfilled, they will say: we did it ourselves.” ~ Lao Tzu

Today’s leaders are tasked with adapting to an ever-evolving workforce that is highly diverse and tech-savvy. Since Baby Boomers are now heading into retirement, younger generations—including internet-native Millenials—are assuming leadership roles earlier in their careers. Teams and mission drive progress more than hierarchy and duties.

Compton City, CA, Mayor Aja Brown made history in June 2013 as the youngest Mayor the city had ever elected. Her leadership has created positive changes in the city, with Compton’s crime rate dropping 25% and an urban renewal underway. Aja Brown was one of nine leaders featured in Leadercast 2015, “The Brave Ones.” The one-day event, held at NOVA’s Annandale Campus, featured leaders from many diverse backgrounds, but all shared the same essential quality of bravery in leadership.

Bravery is … reserved for those whose innovation in their industry cause them to stand out from the crowd, whose unyielding effort and error push their organizations into new territories, and whose boldness compels them to stand up for those less fortunate. [VIDEO: highlights from Leadercast 2015] In our shifting economic landscape, leadership is evolving. Gone are the days of seniority and perks. Today’s leaders are mission-driven, team-centric, and flexible. Here are some essential skills that can help you become a more effective leader, and all are taught through NOVA’s Workforce Development Division.

NOVA’s Workforce Development Division has a Certificate in Management Practices for those seeking a firm foundation in management fundamentals. Many individual courses are also available in addition to the five listed above, for personal development and leadership skills training.

If you are interested in learning more about leadership, management, or just want to learn how to record your ideas and dreams so you can plan your next steps, check out our offerings at nvcc.edu/workforce. 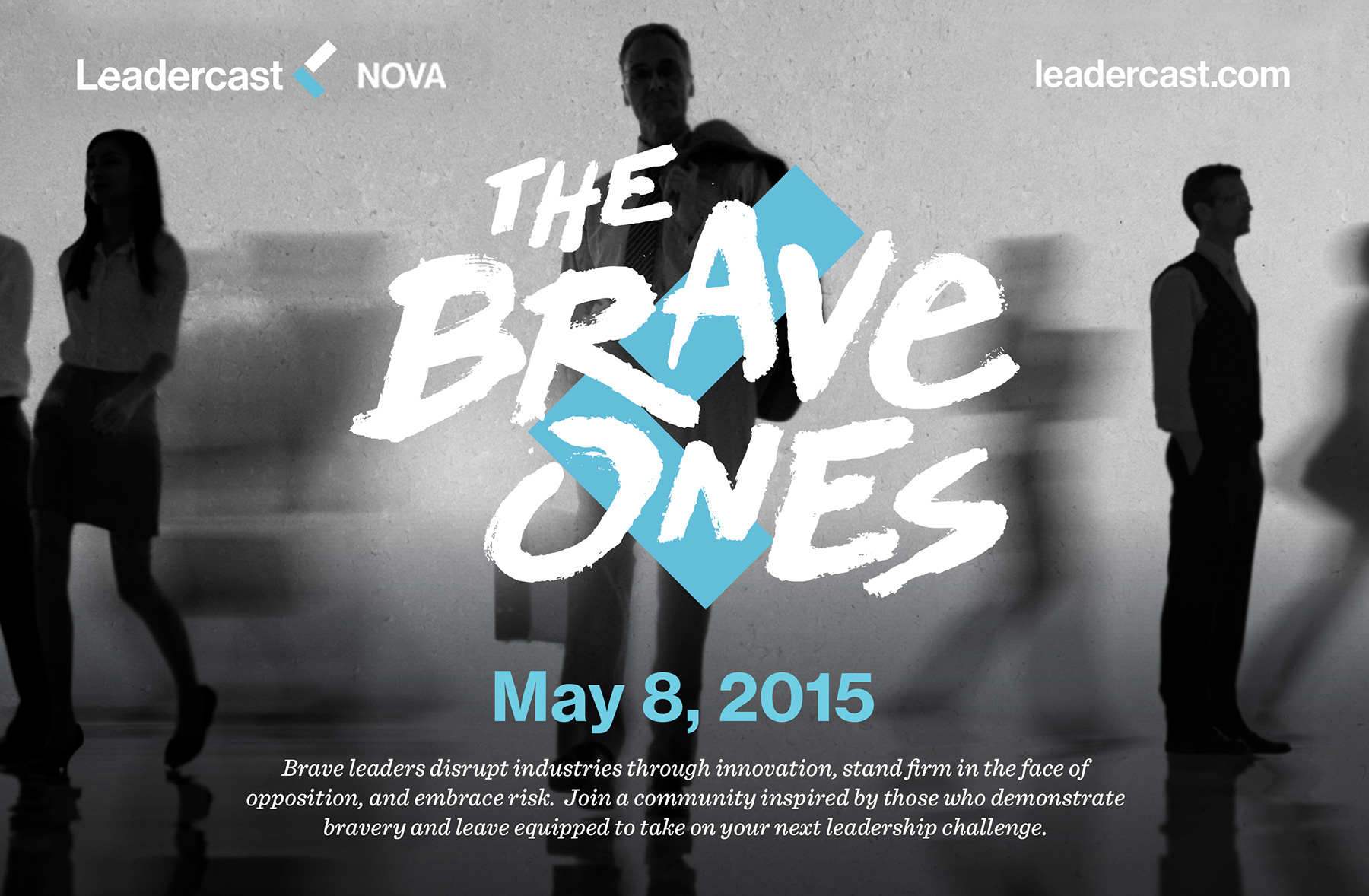 On May 8, 2015, NOVA’s Workforce Development Division brings you Leadercast 2015: an international simulcast event and the premier development event for leadership growth at all levels. This year, Leadercast showcases “The Brave Ones” — leaders who push their organizations further and who stand up for the less fortunate.

An essential behavior for any leader is the act of bravery. Bravery is not a moniker that can be bought… it cannot be self-appointed. Bravery is not attributed to everyone, but is reserved for those whose innovation in their industry cause them to stand out from the crowd, whose unyielding effort and error push their organizations into new territories, and whose boldness compels them to stand up for those less fortunate. These are The Brave Ones.

The Brave Ones have existed throughout history. Some are unforgettable icons, others names will never be remembered. They exist across all industries, societies, and at every level of leadership. Join us on May 8 at Leadercast Live  as we explore The Brave Ones, and learn what it means to lead in such a way that create bold cultures, builds faithful employees, and produces high achievement.

Brave Leadership
Rudolph W. Giuliani is the former Mayor of New York City. After joining the office of the United States Attorney for the Southern District of New York, Rudy Giuliani rose quickly through the ranks, becoming the Chief of the Narcotics Unit at age 29.

After the inauguration of Ronald Reagan in 1981, Giuliani was named Associate Attorney General, the third highest position in the U.S. Department of Justice. In 1983, President Reagan appointed Rudy Giuliani as the United States Attorney for the Southern District of New York. Giuliani spearheaded successful efforts against organized crime, white-collar criminals, drug dealers and corrupt elected officials. Few U.S. Attorneys in history can match his record of 4,152 convictions with only 25 reversals.

In 1993, Rudy Giuliani was elected Mayor of the City of New York. He focused on reducing crime, reforming welfare, and improving the quality of life and was re-elected in 1997. Under Mayor Giuliani’s leadership, overall crime was cut by 56%, murder was cut by 66%, and New York City—once considered the crime capital of the country—became the safest large city in America according to the FBI. Mayor Giuliani also implemented the largest and most successful welfare-to-work initiative in the country, turning welfare offices into Job Centers and reduced welfare rolls by 640,000—nearly 60%. On September 11, 2001, America suffered the worst attack in its history when terrorists crashed planes into the Twin Towers of the World Trade Center. Mayor Giuliani was widely lauded for his steady hand during challenging times. He was named “Person of the Year” by TIME magazine, knighted by the Queen of England, dubbed “Rudy the Rock” by French President Jacques Chirac, and former first lady Nancy Reagan presented him with the Ronald Reagan Presidential Freedom Award. Rudy Giuliani is an American hero. His views on leadership have helped shape the country, and have the capacity to transform the leadership of our organizations and businesses as well.