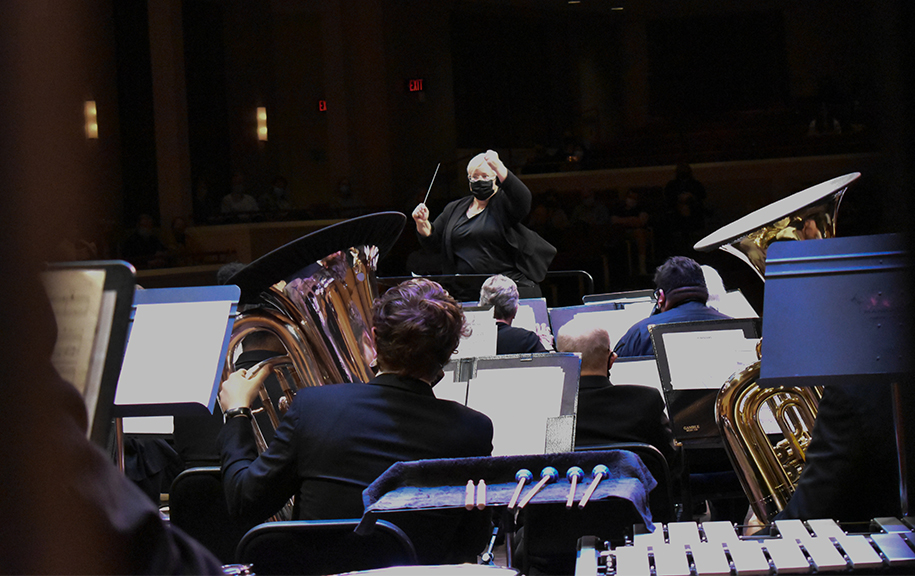 What an amazing night!  Lisa Eckstein guided the band to new heights!

This year’s fall concert was shared between The NOVA Alexandria Band and the George Mason University Wind Symphony. 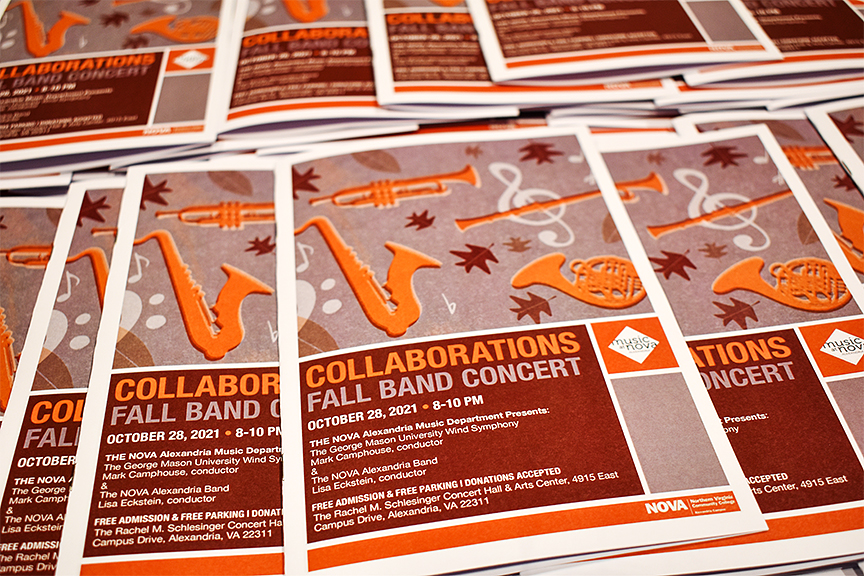 Dr. Kress, President of Northern Virginia Community College gave a wonderful introduction featuring all that we have been through over the pandemic and our resilience in moving forward. 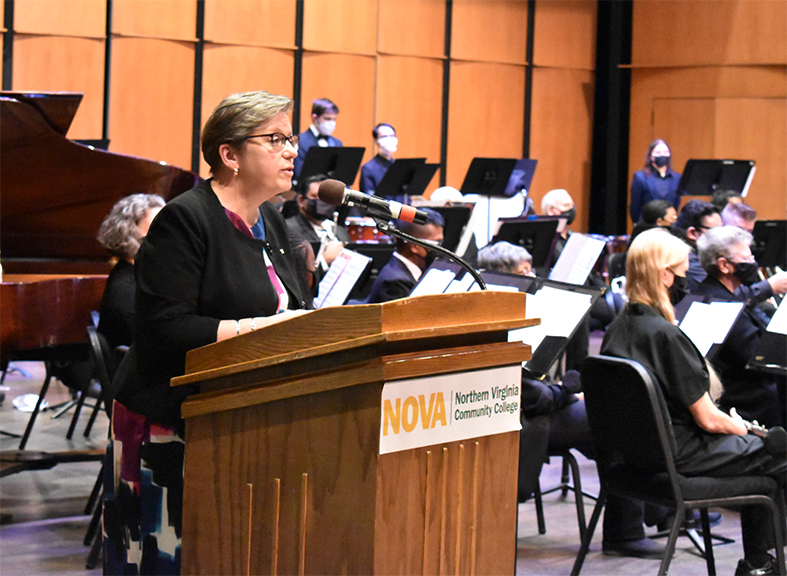 Lisa Eckstein began the night with Shostakovich’s Festive Overture.  The brass, and woodwinds were a flutter with regal soundings heralding out return to in person concerts! 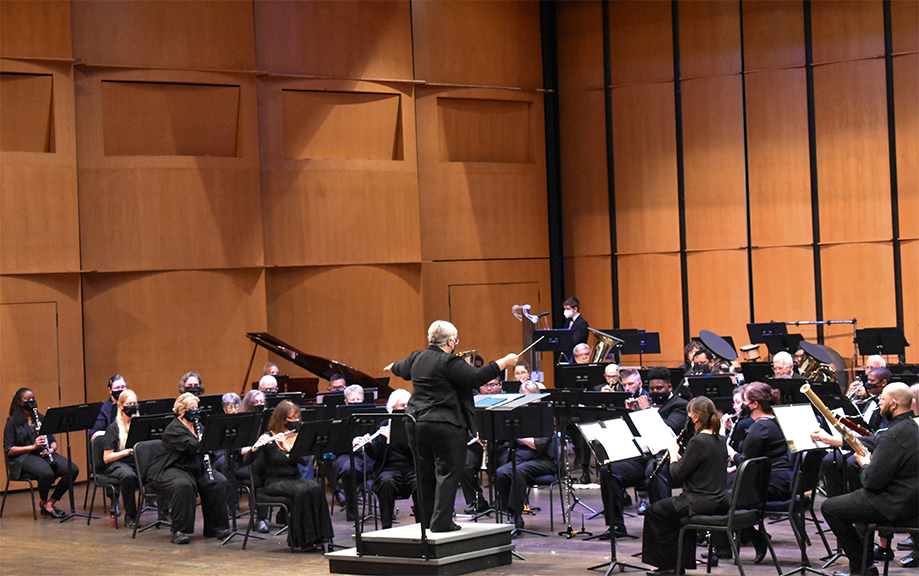 This was followed by Jack Dusek’s NOVA Alexandria Fanfare, composed in 2021! Jack discussed  his work before conducting his piece.

It’s an honor to hear our first live performance of our school’s fanfare! Jack did a wonderful job writing!

Our next treat was Samuel Hazzo’s Blue and Green Music, written in 2011.   Dr. Lisa Eckstein explains, “The piece is based on Georgia O-Keepe’s painting by the same name.  O’Keeffe wanted to depict what blue and green music might look like to her in painting and Sam Hazo wanted to write music that depicted what the title might suggest.”

In 1992, Mark Camphouse wrote a beautiful composition to commemorate Rosa Parks action and impact on America.  He titled this, ‘A Movement for Rosa,’ which was conducted during evening by Lisa Eckstein.  Camphouse provides a wonderful descriptive interview for the work at https://beta.prx.org/stories/7425. His words, and music both there and with our band are incredibly moving!

Matt Bandman followed with his composition, The Tattered Flag, written in 2021.  Matt took the time to tell us about his work before conducting the heartfelt piece himself..

Our final work with the NOVA Alexandria Band was Tchaikovsky’s 1812 Overture! What a tremendous ending!  A tremendous rousing climax to a moving first half for our ‘Collaborations’ Fall Band Concert!

After intermission we began with the George Mason University Wind Symphony under the direction of Mark Camphouse.  Their first work, Air for Solo Flute Unaccompanied featured Samantha Clarke on flute.  The piece was written by Catherine Fields in 2000.

The second work, Olympica was written in 1992 by Jan Van der Roost.  The festival overture is beautifully orchestrated and, ”

This “Grand Overture” was originally, “commissioned by the “Nagano Community Band” – Japan- on occasion of its jubilee in 1992 and is dedicated to the band’s conductor, Ikuo Inagaki.The work is based upon three main themes, each symbolising a certain theme. The first part is characterized by its bright themes played mainly by the brass, accompanied by the woodwinds and festive percussion. This part symbolizes the jubilee which is the origin of the composition. This is followed by a bouncing allegro, in which each register of the band displays brilliant techniques. Especially the woodwinds come to the fore! This movement depicts the industriousness and enthousiasm shown by the members of the “Nagano Community Band” in the carrying out of their hobby. A third, main theme, is choral-like in character and is displayed both in the (soft) brass as well as in the warm medium register of the reeds. Here, nature’s beaty in and around the city of Nagano is musically celebrated. Following a “chamber-music episode” (featuring the flute, oboe, clarinet, alto-saxophone and horn) the initial allegro re-occurs, weaving its way towards a grandiose finale, in which the two previous themes are once again apparent. Due to its very colourful scoring and the enormous diversity of musical thoughts and ideas, this composition is a fascinating and memorable piece, worthy a jubilee overture!” according to  the Jan van der Roost website where you can diver far deeper into his works, recordings and biography.  https://www.janvanderroost.com/en/work/48/olympica-festival-overture-for-band-concert-band-1993

For the third piece Mark Camphouse brought us another of his compositions, “Watchman, Tell us of the Night, written in 1994, which he explained was, “A musical tribute to the survivors of child abuse and neglect.  Commissioned by the St. Louis Youth Wind Ensemble.”

This was followed by  Peter Graham’s, The Red Machine,  A whirlwind of busy mechanical functions.  The work was originally commissioned by the London-based Regimental Band.

Guest conductor, Samatha Clarke directed the ensemble for Psalm, written in 1953 by Vincent Perischetti.  A beautifully sonorous work, it beautifully resonates between the brass and winds.

It was a wonderful concert! Congratulations to everyone on a tremendous evening!

Please join us for our next concert, “Joy to the World, A Holiday Concert on December 7th. 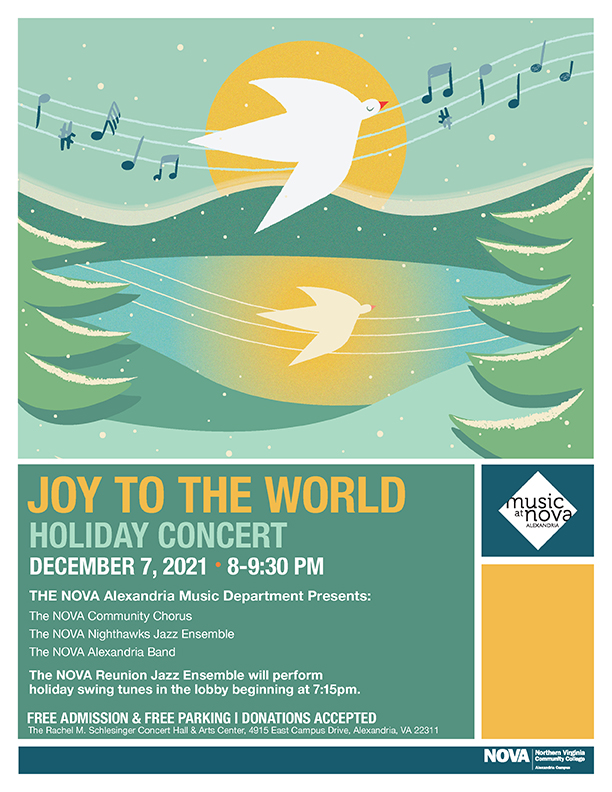