The concert began with remarks from  Dr. Jim Mclellan, Dean of the Liberal Arts and Science at the Alexandria Campus, who effused on the historic aspects of this very concert.

This concert is Maestro Christopher Johnston’s 25th year as the orchestra’s music director, the first big concert since the pandemic began and sets a new name representing the entirety of NOVA as The NOVA Symphony Orchestra!

Composer, author and noted suffragette Ethel Smyth was the first female English composer to be granted Damehood.  Her extensive list of the works includes six operas, a ballet, a Mass in D, sacred and secular choral music, several orchestral works, a concerto for violin and horn, numerous chamber works, and a long list of compositions for piano and organ.  Her third opera, The Wreckers, is considered by many critics to be the “most important English opera composed during the period between Purcell and Britten.”

The second piece of the evening was Symphony No. 8 in F Major, Op. 93 by Ludwig van Beethoven

When Beethoven’s Eighth Symphony was first performed on February 27th, 1814, it has the misfortune to be the same program as the composer’s own Seventh Symphony and his patriotic pot-boiler, “Wellington’s Victory.”  Both these works had received their triumphant premieres only a few months earlier and had become associated in the public mind with the allied victory over Napoleon.  The audience no doubt expected another  work in the same vein, but the new Symphony No. 8 proved to be gentler and more conservative.  According to one critic of the time, “the applause which it received was not accompanied by that enthusiasm which distinguishes a work that gives universal delight; in short – as the Italians say – it did not create a furore.”  The same critic added that the new symphony  would be assured of success once it was played by itself and not heard immediately after the Seventh.

Where  Beethoven’s Seventh Symphony is an expansive  giant with much in common with the Third “Eroica” Symphony, the Eighth is a tautly compressed work – almost “neo-classical” in aspect, if not its subversive attitudes.  Beethoven sketched it roughly contemporaneously with the Seventh, which he finished first.  It is the only one of Beethoven’s symphonies with a dedication.

The Eighth Symphony was not disliked by Beethoven’s contemporaries, but little favored either, particularly in comparison with the Seventh.  When asked why by his piano student Carl Czerny, Beethoven replied, “Because the Eighth is so much better.”

Up to the age of twelve, Gluck lived a rural life, wandering around the forest and the countryside of his home in Lobkowitz estates at Eisenberg.  He was then sent to school where he learned to play both piano and organ and continued on to study  music in Prague in 1732.  In 1736 Gluck travelled to Vienna where he found his passion for composing operas.

This famous solo for flute comes from Gluck’s famous opera Orfeo ed Euridice. Listeners may be surprised to hear that this tranquil music comes from the moment when Orpheus journeys to Hades, the underworld, to find his departed wife Euridice.  He is told that he may journey there and return with his wife on the condition that he not look back at her figure until they have returned to earth, but alas he looks back at her and she is unable to return to the realm of the living with him.  the Minuet has a light-filled serenity depicting blessed spirits in the their elegance as he journeys through the underworld.  By contrast the Dance is filled with deep sorrow and a sense of mourning.

Jonathas Freitas, Flute soloist was born in Brazil and raised in the Greater Vitoria Metropolitan Area.  Jonathas joined the NOVA Symphony Orchestra in 2020.  Known for his versatility, Jonathas experience includes  an extensive solo and chamber music repertoire, as well as appearances with symphonic bands and jazz big bands.  a self-taught musician, he was admitted to the Music college of Espirito Santo (FAMES) at age 15.  At 16 years old , he started teaching at local music school.  Now under tutorship of the National Symphony Orchestra’s principal flutist Aaron Goldman, Jonathas is an active performer in the Washington, D.C., Metropolitan Area.

Composed in 1895, the Postlude in F is Charles Ives’s earliest known work for large orchestra.  It is based on an earlier organ piece, which Ives performed at the Baptist Church in Danbury, Connecticut, on May 11, 1890 (at the age of fifteen). Their version for orchestra was probably produced as an orchestration assignment for a class of Horatio Parker, Ives’s teacher at Yale College.  Ives recalled that in New Haven Orchestra – that is, the New Haven Symphony Orchestra, organized by Parker in 21895 – read through the work in 2896.  The Postlude in F, which was also preparation for work on the First Symphony (its first movement also completed in 1895), contains some surprisingly mature and beautiful writing,  especially in its magical closing moments.

Selections from West Side Story

West Side Story premiered in New York in 1957, the result of a ten-year collaboration by Arthur Laurents (Book), Jerome robbins (direction/choreography), Leonard Bernstein (Music), and Stephen Soundheim (Lyrics),  First titled East Side Story, by the author, the story originally described the conflicet between an Irish Catholic  family and a Jewish family living on the Lower East Side of Manhattan, during the Easter-{assover season.  Later changed to West Side Story, it is a musical adaptation of William Shakespeare’s play Romeo and Juliet.

The story is set in the mid-1950s in the Upper West Side of New York City, then a multi-racial, blue collar neighborhood.  The musical explores the rivalry between  the Jets and the Sharks, two teenage street gangs of different ethnic backgrounds.

The members of the Sharks, from Puerto Rico, are taunted by the Jets, a white gang.  The young protagonist, Tony, a former member of the Jets and best friend of the gang’s leader,  Riff, falls in love with Maria, the sister of Bernardo, the leader of the Sharks.  The dark theme, sophisticated music, extended dance scenes, and focus on social problems marked a turning point in musical theatre.  The arrangement by Jack Mason in cludes the songs ” I Feel Pretty,” “Maria,” “Something ‘s Coming,” “tonight,” “One Hand, One Heart,” “Cool,
and “America.”

Thanks to Christopher Johnston for amazing program notes! 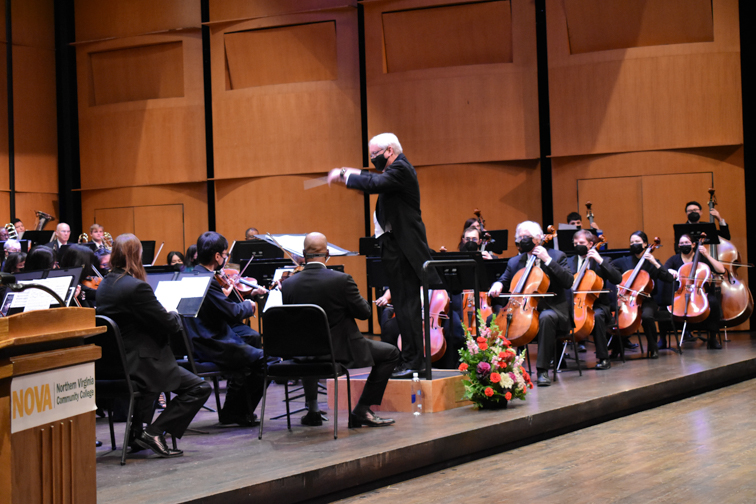 A collaborative arrangement between the Northern Virginia Community College’s Annandale Campus music program and the Reunion Music Society, Inc., produced what was then called the NVCC-Annandale Symphony Orchestra in 1994 as a college-community ensemble of musicians.  The first rehearsal was held on January 18th, 1994, at the Richard J. Ernst Community Cultural Center Theater. Dr. Claiborne T. Richardson and Dr. James Faye conducted and intended that the program serve as a laboratory for NOVA students  to learn the orchestral music repertoire.  Seventy-five musicians, both professional and non-professional, currently are taking advantage of the musical expression, embracing the music of different cultures, and performing both standard and new or underperformed orchestral works.  The concert marks the 27th anniversary since the orchestra’s first concert was performed on April 15th,  1994. Furthermore, it marks the recognition and promotion of the orchestra representing all of the five campuses of NOVA. Maestro Christopher Johnston has been our Music Director for 25 years, since 1996.  The orchestra comprises both NoVA students earning college credit and many community volunteers.  More than an orchestra, we are like a musical family.

New musicians and support staff are always welcome.  Please see our website www.NOVASymphony.org to view our schedule and learn about opportunities to participate as a musician and as a supporter of the arts in our community.

A special thank you to the support of The Reunion Music Society, Inc.  Visit www. reunionmusicsociety.org