If you haven’t heard of Minecraft, you must be living under a rock. This is a gaming phenomenon that has swept the nation – and the world. My ten year old son plays it, my thirteen year old daughter plays it, and my forty-something husband plays it. Hundreds of YouTube channels are dedicated to Minecraft, filled with tutorials and screen-capture videos, created by enthusiasts from age 5 to age 95.

If you are not familiar with Minecraft, here is a great description by Mark Ward of BBC News:

“The game is set in a virtual world made of cubes of different materials – dirt, rock, sand, lava, obsidian and many more. Almost all of these can be used as building blocks and a few can be refined into usable raw materials (wood, iron, diamond etc).
Playing the game involves surviving by using blocks to build a shelter (which can be as crude or elaborate as you like) and turning raw materials and combinations of them into items (swords, armor, bows) to help kill the game’s many monsters (creepers, skeletons, zombie pigmen etc).” You can read Mark’s full article here.

I’m not just here to review a video game however. I would like to point out that Minecraft is NOT just a game. I could talk for hours about the many real life skills that can be acquired from playing Minecraft.  But I would like to talk briefly about Redstone. Redstone is one of the raw materials that can be “mined,” and it has properties that cause things to move or react in some way. In many cases, Redstone is used to make train tracks, conveyor belts or elevators that allow items to be carried from point A to point B. But more recently, people have been using Redstone to create machines such as printers, and computers. This really blew my mind!

I would like you to take a few minutes to watch a couple of these videos.

If you haven’t played Minecraft, give it a try – or at least ask the nearest ten year old of their thoughts on it.

So here begins a new FSRC Blog segment called “Did You Know?…” which features cool and interesting tips, tidbits, and shortcuts for software programs that you use every day.

I’m starting out with a quick tip about Google Chrome. Did you know that you can go “incognito” on Chrome to avoid saving any cookies or history on the computer you are using?

Step 2. At the top right of the screen, click on the “hamburger” icon. (Three lines inside a square). 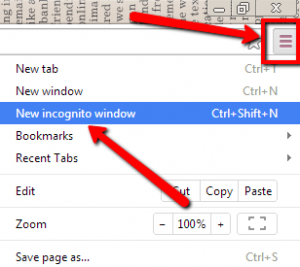 Now, any browsing you do, or any websites you log into will be completely hidden from the computer you are working on. This is especially useful if you are working on a public (or college) computer and would like to access your banking website, or anywhere that you need to enter private usernames and passwords.

Once you close the incognito browser window, all activity will be deleted from the computer, and completely untraceable!

If you have any questions about this, or any, posting on the FSRC Blog, please feel free to contact us here at the FSRC and we can further explain or walk you through the steps.