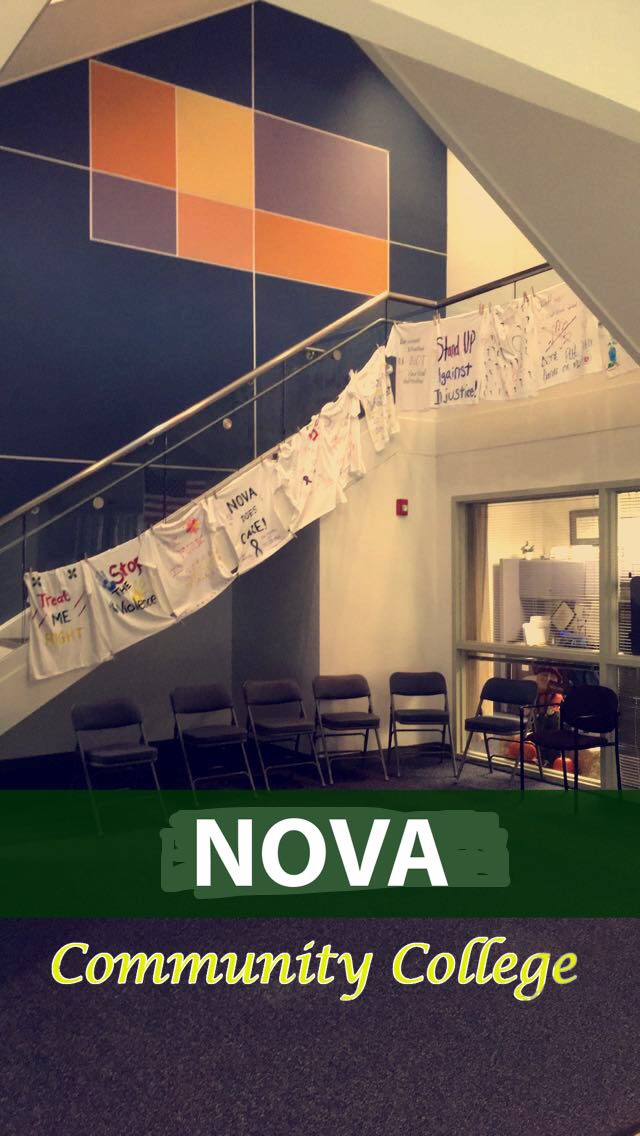 NOVA SAS coordinates The Clothesline Project at NOVA.  Today we visited MEC. Here are some of the shirts that were designed today!

“The Clothesline Project is a non-governmental organization created to bring awareness to the issue of violence against women. For women who have been affected by violence, it is a means of expressing their emotions by decorating a t-shirt. After the shirts have been decorated, they are hung on a clothesline display.”

An active bystander speaks up or calls attention to an issue that doesn’t seem right. You are often the first to see any concerning behavior, so if you “See Something, Say Something.” This can prevent various types of sexual misconduct and identify behavioral changes, stress, suicidal actions, or depression. If you have seen something concerning, please file an online report at www.nvcc.edu/novacares. For more information or assistance contact NOVA Sexual Assault Services at NOVA.SAS@nvcc.edu or call 703.338.0834. If someone is in immediate danger call 9-1-1 or NOVA Police at 703.764.5000. To learn more about bystander intervention visit http://www.nvcc.edu/novacares/_docs/Bystander_Intervention_FAQs.pdf.

Tip of the Week 9/16
• U-Lifeline is a free online resource for college mental health. This resources gives information on a variety of issues such as alcohol and drug usage, anxiety disorder, bipolar disorder, emotional health, schizophrenia, stress and suicidal behavior. For the Crisis text line Text START to 741-741, for the National Suicide Prevention Lifeline call 1-800-273-TALK (8255) for immediate help. For more information visit http://www.ulifeline.org/nvcc/

NOVACare’s offers several resources guides available to the NOVA community. If you are dealing with the loss of a loved one you can visit our website http://www.nvcc.edu/novacares/program/index.html, and click the page “Grief and Loss”. Under that page you will find information guides on dealing with grief, non-profit organizations and other grief support resources. Grief support resources can provide members with validation and understanding of the intensity of their experience. By providing members with a compassionate community that will support them in their struggle, it gives members the opportunity to share their strengths and coping strategies.

TIP OF THE WEEK #2 (9.2.16): NOVACares is the college’s “See something, Say something” program where if you see any concerning behavior, you can submit an online report: https://cm.maxient.com/reportingform.php?NorthernVirginiaCC

Concerning behavior can be anything from feeling overly stressed to a change in attitude or personality of any member of the NOVA community. Reports can be submitted anytime and trained NOVACares responders will follow up with reports to maintain a safe community. To learn more about the NOVACares program visit www.nvcc.edu/novacares/ or email: NOVACares@nvcc.edu

According to a study released by the CDC’s National Center for Health Statistics
on April 22, 2016, suicide rates increased 24% between 1999 and 2014, the highest they have been in three decades. The greatest pace of increase came after 2006, and rates increased for both males and females of all ages 10-74. Females aged 10-14 and men aged 45-64 had the largest percent increases in suicide rates, 200% and 43% respectively. This troubling new data was released just days before the beginning of Mental Health Month, observed each May for over 60 years.

The new CDC report also confirms that “suicide among adolescents and young
adults is increasing and among the leading causes of death for those demographic groups.” Suicide continues to be a major concern on college campuses with issues of contagion and ideation at the forefront of challenges facing suicide prevention specialists. The statistics for college students are alarming:
 Suicide is the 2nd leading cause of death among 18- to 24-year-olds.
 One in 10 college students has made a plan for suicide.
 There are more than 1,000 suicides on college campuses per year. This is approximately 100 times greater than the average number killed by active shooters on college campuses.
 Suicide contagion and clusters are more likely among young people in contained communities such as college campuses.
 The rate of suicide is between .5 and 7.5 per 100,000 among college students.
 Suicidal thoughts, making plans for suicide, and suicide attempts are higher among adults aged 18 to 25 than among adults over the age of 26.
 Thoughts of attempting suicide are reported to occur among 5% of grad students and 18% of undergrads.